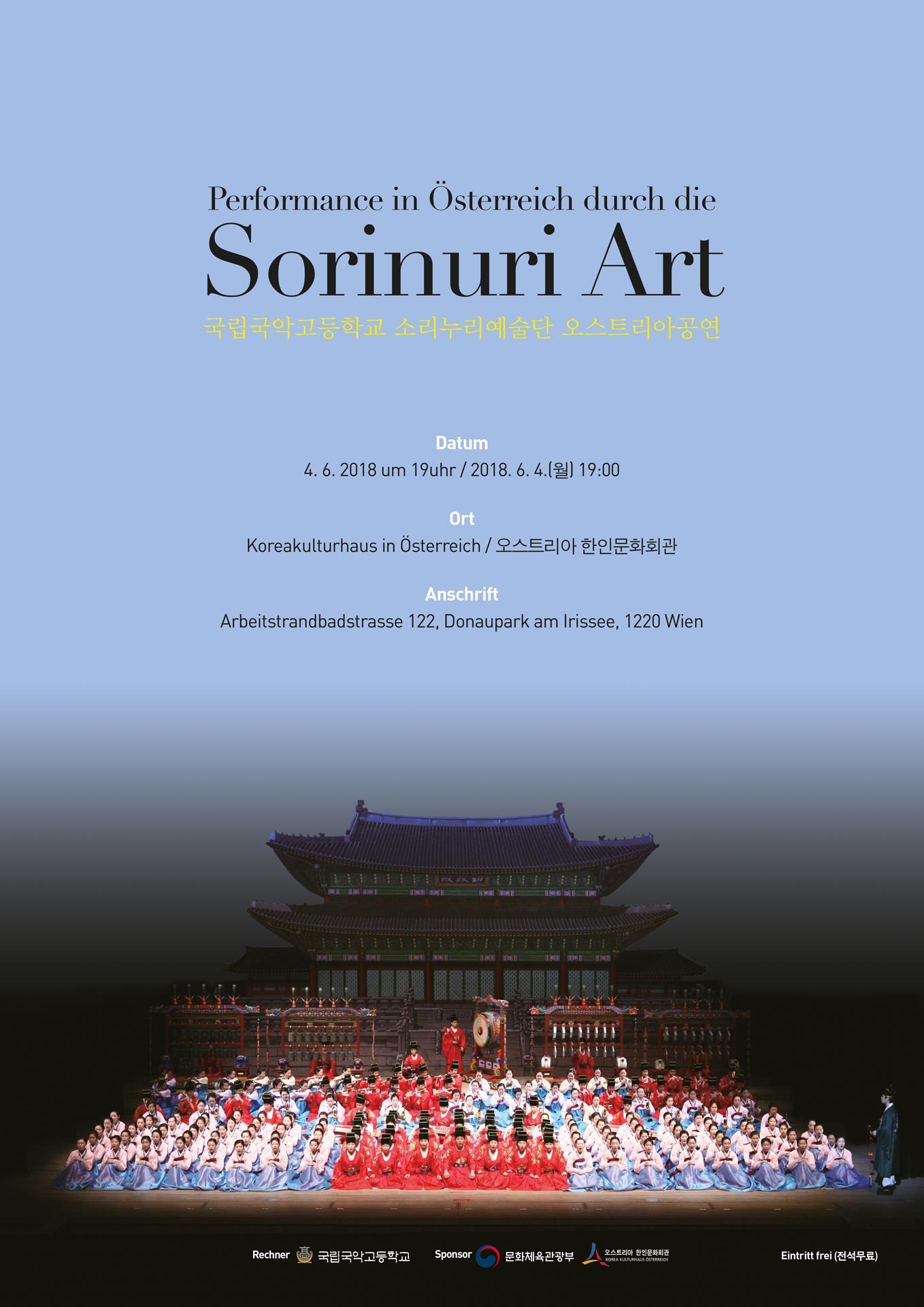 As an educational institute specializing in traditional Korean art, the school was awarded the 4th Sejong Cultural Prize (education category) in October 1985. It was designated as a special purpose high school in June 1992, and as a charter school with a remit to develop educational autonomy in the arts field on March 1, 2002. Two to tree times each year there are performances in China, Europe, America, Russia and etc.

The school has built up a solid reputation based on the fact that every year 90% of its graduates enter a university, with 20% of them obtaining a place at Seoul National University, and the entrance fees and tuition fees are supported by the government. Gugak National High School is located at the foot of Guryong Mountain (65 Gaepo-ro 22-gil, Gangnam-gu, Seoul) and covers an area of 19,800 m².

The ‘Sorinuri Art Group’ in Gugak National High School was established in 2012 to disseminate Korean traditional music to the public, to carry on music traditions, and to develop and modernize the music. It is a traditional cultural and art delegation composed of excellent resources among first and second graders.

The ‘Sorinuri Art Group’ has performed in more than 20 countries including the U.S., Britain, Italy, Switzerland, France, Germany, Austria, Hungary, Sweden, Denmark, Norway, Russia, Singapore, Cambodia, Japan and China. In addition, it has performed more than 300 domestic performances including an invited performance at the Incheon Asian Games and an invitation to the National Assembly building. It also plans to actively communicate with the public through regular concerts and various concerts in connection with oversea and communities every year.

Sujecheon, meaning ‘eternal life like heaven’ to the listeners, is one of the most famous pieces of music and music that has been handed down by word of mouth since the Baekje Period.

Sujecheon is one of the most historic pieces currently playing in Korea, is a majestic and colorful piece of the song, and has another name ‘Jeongeup’. This song was used during the royal banquet and the royal procession. It was also used as an accompaniment to the court dances ‘Cheoyongmu’ and ‘Mugo’, and is now used as instrumental music without lyrics. It was also selected as the best traditional music of the first UNESCO Asia Music Festival held in France in 1970.

Buchaechum is a dance performed with elaborately decorated fans. Created by Kim Baek-bong, this dance was first performed in 1954. Originally, female shamans in shamanist costumes performed the fan dance. However, this recomposed dance piece was created by combining the excitement of gut rituals with court dance movements that exhibited the beauty of restraint.

Accentuating the elegant lines that are created, the fans are opened, closed, twirled and moved in sweeping motions to express a diverse array of natural phenomena such as the trembling of flower petals or flowing water with lively folk music.

Sanjo is a representative folk music genre and performed as solo. It is instrumental music that can express a soloist’s creative interpretation and techniques. Sanjo, meaning ‘scattered music’, is originated from the shaman music of the Jeolla province(southwestern part of Korea). And the music features a structure of beats gradually increasing in tempo from the slow beat Jinyang-jo to medium tempo Jung-mori and Jungjung-mori, and the fast tempo Jajin-mori.

The traditional sword dance which originated in memory of the courage of the Silla Hwarang ‘Gwanchang’, is inherited by a somewhat feminine dance. Therefore, on the theory that the dance was used to train the spirit and spirit of the Silla Hwarang, it was intended to straighten out the sword which could harm or protect it with more dynamic movements.

Samulnori was made by Kim Duk-soo party in 1978, and it is a music played indoors with only rhythmic instruments such as Kkwangwari, Janggu, Buk and Jing. It is a genre that was created by the sound and rhythm of Panggut during Pungmulnori. Despite its short history, it is loved by the public to become a representative genre of Gugak.

The album of the crossover Gugak group ‘Playground’ is a reorganization of ‘FLY TO THE SKY’ with Gugak orchestra. This song is composed of Korean sensibilities featuring the Korean people’s vigorous spirits and hopeful sentiments. Once played at the closing ceremony for the 2014 Asian Games in Incheon. And listening to the music, the beautiful scenery of Korea is naturally imagined, and it feels pride and patriotism toward Korea.

This is the representative creative song of KBS’s Gugak orchestra conductor Lee Joon-ho, who expressed the atmosphere in a different way than in the form of play. Byuldalgeuri jangdan leads the overall flow and provides improvisation to each instrument based on simple theme melodies.